If you hear a rumor that I had my house “handed to me”, Let me take you through the process I went through to become a homeowner.

It all started many years ago when the house I was renting burned down on Christmas Eve while I was at work. I was evicted because of it. I moved back home for a week or so, knew that would not work with the young adult life that I had gotten used to. There was also a short time staying in a shack in the woods, but a bullet through the bathtub was my cue to move out of there, so without telling anyone, I moved into my Brown $300 van that my friends Steve and Forrest helped me repair the day I bought it. It was missing a freeze plug. We had to rig a funnel on a garden hose going to the engine as we poured gallons of water into it as we drove to someplace where we could put a new freeze . Steve and I tried, but it was Forrest who finally was able to get the new one in. I had found a loveseat hide-a-bed that fit perfectly in the back. I had one CD Fly (Dixie Chicks album) I think I had a few more, but Fly was just so therapeutic that I repeated it over and over for months. No one knew I was homeless really, I would pretend to be too drunk to drive and ask to sleep in friends driveways, or store parking lots or the boonies of Cape Coral. I was never discovered, and always found a way to shower at someone’s place as I “didn’t have time to go home first” before I went out with friends. Luckily this was in the fall and winter, free air conditioning.

Then summer came and I couldn’t take the heat anymore. Around that time my friend Steve found a place we could stay for a few weeks. We had a blast every night was a party and I was back to my three showers a day standard. The best part about being homeless and still working was the ability to save up money. Steve and I decided to rent an apartment and I felt at home and very fortunate to have a safe roof over my head again. That worked out for a few years. Steve, me, and sometimes Chris in the laundry room had the time of our young lives to that date. As the years went by I had felt like I needed to be on my own after a while. I think I just needed a break from the partying.

Steve found his own place, and then it was just me, a 50″ HDTV, Felicity and Ally McBeal. The fourplex was bought by a real nice gentleman, but every time I had a houseguest for a few days or just overnight he would have a talk about upping the rent if I had other people staying there. So there I was, in my thirties sneaking girls into my own apartment at night. I knew it was time for my next step.

Fortunately, friends of Steve were real estate agents and I was able to ask them for help finding a home that would fit into my budget (I try to live within my means), fit into how much I was able to put down and had all its assessments paid, concrete block, and a three bedroom two bath. That was a tall order in Cape Coral. My mortgage broker said my credit wasn’t good enough because I only paid for things I could afford, I know right, how was I to know that was bad. But the cool thing was I was able to provide receipts for rent, utilities, insurance, and every other receipt I had for the previous ten plus years, and every single one of them was paid early or on time. Every single one. There were I think six rent receipts missing from that lot, and I almost lost the opertunity because of that, but I knew I had them somewhere, so I dug through every box in my parent’s garage I had stored there and found them all. I also got reference letters from my previous and current landlords, my car insurance company, my job, and my friends stating that I am a responsible person. So with over a decade of not one late payment I was given a mortage.

With the help of these kind people and about three months looking at every house that fit into this small category, putting in a bid at asking price, and loosing every one of them to cash buyers who offered more. Finally, a short sale that I put a bid in on was accepted! I had enough for the minimum down payment I was told I needed. But as anyone that goes through the process finds out that amount that you think you need quickly doubles then that amount doubles, and oh yeah doubles again. Then there are home inspections, fixes that had to be made before it would pass inspections like the garage door springs that had to be replaced, $500, sure, no problem. It was quickly becoming more than I could afford to get into this house. All this while watching my dad fade away in Hope Hospice.

In A George Bailey Moment, all my friends came together to give me the extra of what I needed to get me into this home. Some a lot more than others, but every little bit helped, and I couldn’t have done it without any one of them. Then nine years and nine months ago, me, Albert Burdge became a homeowner.

Did I do it alone? No, of course not. Was a house just “handed to me”? Absolutely not. I worked very hard to pay all my bills on time for years and took great pride in that. I had the idea of buying a home. I had made many friends who helped me, and I had helped without a second thought over the years expecting nothing in return, but in my hour of need, my circle of friends came through without question or exception. I think it may be normal for a lot of people to get help getting their first home. I am not ashamed of getting help or embarrassed in any way. On the contrary, I am grateful beyond my ability to express my gratitude to everyone who helped me.

Years back my situation changed to a more collaborative financial situation and I was not able to budget or rely on others in the partnership. Bills were mostly paid late if at all, late fees and extra deposits were always using up what was left, there were fingers in the till as well. It was a losing battle trying to keep up with my former record of being financially responsible. I just believed everyone else had the same logic as me, pay all the bills due during that pay period and live off of what was left over. It was a dark time in my life where $20 in my pocket for a week was a good thing. After a while, I just threw my hands up in the air and gave up on ever being financially responsible again. I never want to get to that place again. Over the past most of a year or so I’ve been on my own financially again. I started out way behind with bills two or three months behind and only myself to rely on. I was able to catch up with my bills one month at a time, paying as much as I could on every bill until I was caught up and ahead. I get paid monthly on almost the same day every month (Sundays may skew it a day here or there). On that day, I pay all my bills and then budget the rest of my month with what I have left. It’s surprising how affordable bills can actually be without continual late fees. I am still considered poor by the national average, but my bills are paid, and I don’t live in fear of what utility will be shut off, and our bellies are always full. I’m slowly paying off old credit card debts with set monthly payments. I work hard and sleep well. I see a day in the future when all old credit debt will be paid off and I’ll have much more income than outgo.

To all of I may have let down, during the bad times I apologize. To everyone that helped me along the way, from the bottom of my heart, I say thank you.

Liked it? Take a second to support Albie on Patreon! 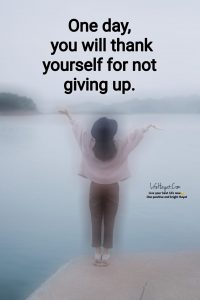